The Beginnings of The Continental Steel Works

With the news that we are to welcome the team from Sheffield’s Kelham Island Museum to Special Quality Alloys later this month, we embarked on gathering some information on the beginnings of our historical site The Continental Steel Works.

This article ventures into some fascinating history, trials & tribulations and a remarkable twist of fate! 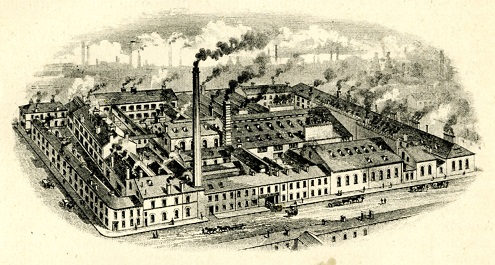 Back in 2014, Special Quality Alloys Ltd moved into the recently vacated Continental Steel Works. This prestigious and historic building was within several yards of our previous home and heralded a new era for the company.

After much needed and considered renovation, we are now based in this fantastic building which is steeped in Sheffield industrial history.

With the news that we are to welcome the team from Kelham Island Museum to this site next month, we embarked on gathering some information on the beginnings of this building. There is also a remarkable twist of fate which connects the history of the Special Steel Group to this site.

The Continental Steel Works was originally the home of Jonas & Colver which was established in 1870. They were soon to be one of the largest manufacturers of high-speed steels for use in tool-making. By 1906, the company employed over 2500 people on this site and were a world-wide name. There is some excellent evidence regarding the presence of the company on the world-stage. They were proudly exhibiting their wares at international exhibitions in the US, Paris and Argentina back in the late 1870’s!

German born, Joseph Jonas of Jonas & Colver certainly had the most colourful life. In 1904, he became the Lord Mayor of Sheffield and later that year he was knighted. From being a very successful businessman and recognised at local and national level for his achievements, it all came to a crashing end in 1918. He was stripped of his knighthood in consequence of an incident which led to proceedings against Sir Joseph under the Defence of the Realm Act. His crime had been discussions with a potential German customer in 1913, a year before the war.

He was convicted at the Old Bailey and fined £2,000 on a charge of aiding, abetting, and procuring a man named ‘Vernon’ to obtain and communicate information relating to a prohibited place. He was judged to have committed a misdemeanour - this lesser offence saved him from the death penalty!

In recent times, local historians have campaigned for Joseph to be remembered for the many good things he did and shared the view that this was a real miscarriage of justice. A fascinating story indeed.

The company continued to be leaders on the world market well into the 1970’s. It was said that in 1967, Jonas & Colver were one of the biggest manufacturers of high-speed steel not subject to nationalisation. The company left a real imprint on the Sheffield steel industry and their legacy is still very visible today. The Continental Steel Works was tastefully renovated and many original features still remain. Joseph Jonas’ Sheffield home is now a University of Sheffield hall of residence called Halifax Hall and his portraits can be seen in the galleries of local art museums.

Although, Special Quality Alloys Ltd have no real connection to Jonas & Colver apart from residing in the same premises many years later, there is a remarkable link to the two companies which was a real twist of fate!

Back in 1906, Bennett Beardshaw began his career with Jonas & Colver as a junior clerk in the accounts department. After 18 years of service, Bennett suggested the company should venture into the heat treatment business. Unconvinced of this, he was invited to leave and in May 1925 he set up Special Steel Co Ltd only half a mile away which is still the site of our parent company.

The processing of steel continues in this corner of Attercliffe, Sheffield. Our forging hammers are still very busy today producing parts for many critical industries around the world and long may this continue!